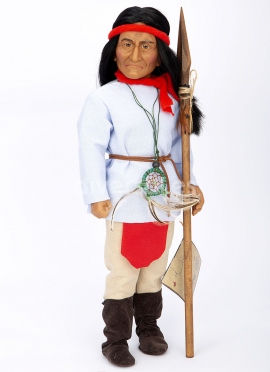 “Mother cántame song to forget my pain, mend my broken bones, and bring all things new” Jerome, whose true name was Goyathlay (One who Yawns), was born in Mexico in 1834, a Human medicine and a Shaman par excellence, was the Leader of the Apaches Chicarauas did the war in Mexico and North America until 1886. “Tiger of the human race,” as it was named, died in 1909 in captivity and forgot at the last Fort Sill. The population of Apache was estimated to about 10 000 persons who are in the reserves of new Mexico, Arizona and Oklahoma. His language is Atapasco .